Circus hotel
I worked in the food industry most of my life now retired and trying to find time for our hobbies Member of Circus Model Builders, Circus Fans of America, Circus Historical Soc., Life member Circus World Museum Inc., have been a member of the CWM train crew and Lot Supervisor in Milwaukee for the Great Circus parade. I model in Ho and G gage (1/2 inch) and can do displays from 4ft to 36ft all self contained our Circus is known as the "Mighty K Circus" and our parade is a scale mile and one tenth long one block now represnting the 600 block of College ave in Appleton Wis the rest of the street is my town called Imaginary or your home town 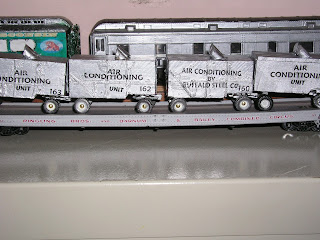 Ringling had 8 of these wagons  from  1939 to 1942    in the front of the wagon was a ice bunker that a huge fan in the rear blew air over the ice and thru a tube that attached to two pipes in the top of the wagon     the tubes were also attached to the top of the big top    a interesting note is also in the rear was a heating unit so that in cold weather they could heat the tent  with the same units
The wagons were numbered  160 to  167   and were  16 and 1/2 ft long 8 ft wide and 10 tall built by Southern Iron and Equipment Co .  Buffalo Fordge handled the design  and fitting of both the A/C and heating equipment.   The Fans were capable of handling 17,000 cu ft of air per  miniute and wer driven by GE 3 hp Electric motors   Each Ice bunker helt 6.000 lbs of ice  and operated  on much the same principle as todays evaporative cooling systems.